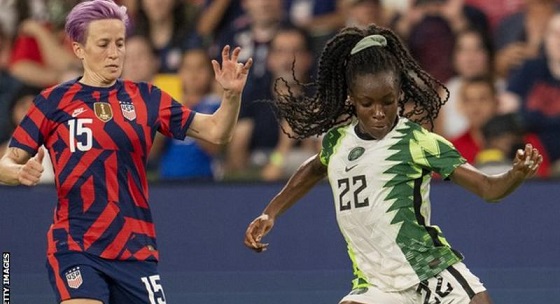 Nigeria international Michelle Alozie says her side are fully focused on winning their final qualifier and reaching the Women’s Africa Cup of Nations.

The Super Falcons, nine-time continental champions, face Ivory Coast in a two-legged tie next February for a place at the tournament in Morocco.

Alozie, who plays for Houston Dash in the National Women’s Soccer League in the United States, recently took part in a national team training camp in Abuja.

“It was really good to get a full nine days with everyone to prepare for the upcoming games,” the 24-year-old said.

“We had a lot of positives, and it was good to see some new faces from the domestic players in Nigeria. We need to work more together, to get more acclimated to one another, and that is what these camps are for.

“We are continuing to build for these qualifiers.”

Nigeria narrowly saw off Ghana 2-1 on aggregate in the first round of qualifying in October, and must overcome another west Africa rival to have a chance to lift the Nations Cup for the fourth time in a row.

Africa’s representatives for the 2023 Women’s World Cup will also be decided in Morocco in July, with the semi-finalists all booking spots in Australia and New Zealand.

“We know this is a revenge game so we are going to put everything in it,” Alozie said, referring to the fact Ivory Coast knocked Nigeria out of the qualifiers for the 2020 Olympics in Tokyo.

American-born Alozie made her full Nigeria debut against Jamaica in June, fulfilling a “childhood dream”.

“This is something I have always wanted to do,” she added. “I am so happy I have been able to have a few caps as a Super Falcon. I just hope I can continue this journey – it’s amazing.”

However, she has had to contend with scoring an own-goal in the 4-2 defeat by South Africa in the Aisha Buhari Cup

in September, having been converted from a forward to play in defence.

“It comes being a defender for the first time,” she said.

“I remember some of my team mates at Dash told me that me scoring an own goal is me officially being a defender. It happens and I just have to be quicker on my feet.

“We move forward and we don’t really look at the past that much.”