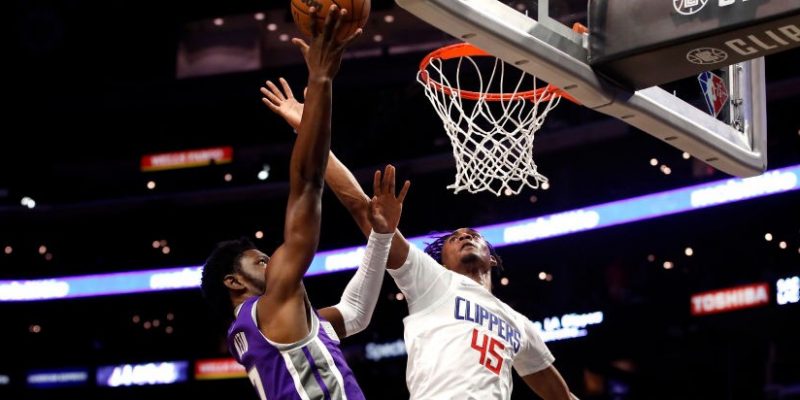 Sacramento Kings of America’s Nigerian ace, Chimezie Metu got a major part of the highlights, as his huge block helped his side snatch victory against Los Angeles Clippers in USA’s National Basketball Association (NBA).

Metu’s effort, one of a career-high five for him on the night, was, however, dwarfed by the ratings fetched by Terence Davis, who scored 23 of his 28 points in the second half of their side’s 104-99 victory on Saturday.

That effort helped The Kings beat LA Clippers for the second time in four nights, as Davis made all four of his 3-point attempts in the third quarter and finished 6 of 11 from beyond the arc.

De’Aaron Fox had 17 points, seven rebounds and five assists, and Marvin Bagley III recorded his first double-double of the season with 12 points and 11 rebounds.

Paul George had 15 points and nine assists, but shot just 5 of 21 from the field, while Ivica Zubac had 12 points and 11 rebounds.

Sacramento used a 12-2 run early in the fourth quarter to open its biggest lead of the game at 90-76.

Los Angeles answered with nine straight points to get within 90-85, but Davis’ three-point play pushed the lead back to eight with 4:24 remaining.

Morris made a deep 3-pointer with 10.4 seconds remaining to cut the Kings’ lead to 102-99, but Buddy Hield made two free throws to seal the win.

Sacramento held Clippers to just 38% shooting from the field, including 13 of 34 from 3-point range and The Kings shot 42%.

Before all that, though, Los Angeles opened the game on a 9-2 run and led by as many as eight in the first half.

Sacramento went on a 10-0 run late in the second quarter to take a 50-45 lead into halftime and, at the end, The Kings’ win marked their first home victory against The Clippers since March 19, 2013.

They snapped a 15-game losing streak, Bagley returned to the lineup after missing two games with a non-COVID-19 illness and Metu had a career-high five blocks.