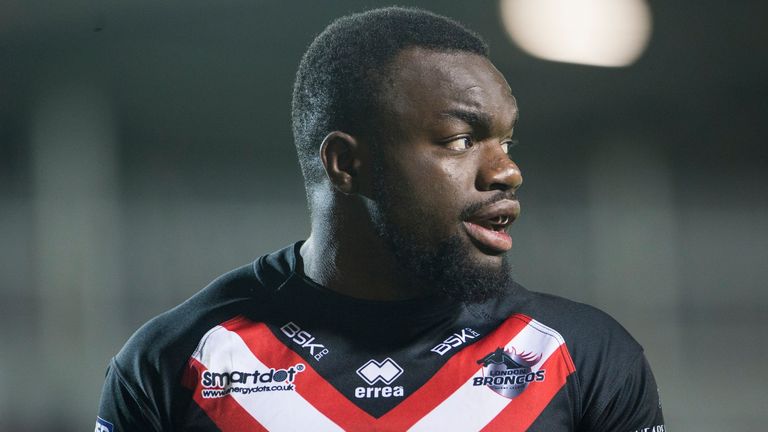 Wakefield Trinity Rugby Club of England new signing, Sadiq Adebiyi has gained a massive surge into the spotlight following the deal he sealed at the end of last week.

The English Rugby League’s latest rave on the pitch was born in Lagos but raised in London and is now holding high hopes for growing further in the game.

He is quick to point to his roots, even as rave reviews are trailing his move to Wakefield and lavish forecasts predicting what he is capable of doing in the coming days.

His words have raised hope among rugby loves that, among the diverse array of nationalities which will be represented in Super League in 2022, there will be at least one player flying the flag for Nigeria.

Although raised mostly in London after moving to these shores with his family at the age of six, Adebiyi proudly seized the opportunity to represent the country of his birth two years ago when it hosted – and won – the revived Middle East-Africa Championship.

Like so much else, the Covid-19 pandemic has led to the African nation’s nascent rugby league development being put on hold. Yet prop Adebiyi, who has joined Wakefield Trinity for next year, still has ambitions to help build on that MEA Championship success.

Things are now looking brighter for the prop and left-back, after he signed a one-year contract with an option for a second and becomes The Trinity’s first signing under their new coach, Willie Poching ahead of the 2022 season.

SportsDayOnline.com further gathered that, in agreeing to move from English Ruugby Championship side, London Broncos, the 24-year-old signed a 12-month deal with an option for an extension in 2023.

The dark-skinned star, who previously featured in Super League for The Broncos two years ago, missed most of the 2021 season with a ruptured Achilles, but Poching expects him to make a big impact for Trinity next season.

The new ace, who has been part of the Broncos set-up since joining their academy aged 15, is now looking forward to getting another opportunity in the top flight after agreeing the move north, while also thinking about what he can take back home to Nigeria.

Adebiyi, who scored two tries in Nigeria’s 38-10 win over Morocco in the final, told Sky Sports: “I seriously think rugby league could be big in Nigeria.

“Having experienced it two years ago, it was something I was keen to do and get a lot of players from Nigeria playing rugby league.

“It’s a heritage I’m super-proud of and unfortunately it’s taken a bit of a backwards step, but when it comes down to it, I’d love to be involved getting the country of Nigeria playing rugby league and doing my bit to get everyone in Nigeria to know what rugby league is.

“The support they were getting was outstanding, so if we can use some of that and kick on from now, I seriously think I could see Nigeria competing with some of the big nations in the future.

“I’m really excited. When I got the call from Willie about joining the club, I just couldn’t wait to get started.

“Wakefield Trinity is a great club and I can’t wait to meet the fans and the people around the club. It will be a big change for me, but I’m looking forward to the challenge.”