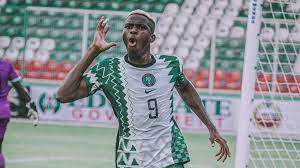 A member of the Nigeria Football Federation (NFF) who pleaded annoinousity has confirmed that Serie A Napoli SC forward Victor Osimhen will be part of the 2021 African Cup of Nation Billed to kick off in Cameroon January 9th.

Osimhen who had a multiple head surgery recently in Italy due to injury he sustained in one of their club league games recently will soon joined his club side in the training before the end this end.

In a brief chat with SportsDay today, a member of the federation revealed that Victor Osimhen will definitely be part of the Super Eagles that will play in the AFCON in Cameroon.

According to him, “I know it has not been easy with the Football Federation trying to fix things before the players resumption camp on the December 5th.

“But among the invite players Victor Osimhen who is just recovering from a multiple head injury will definitely be in Cameroon for the AFCON.

“I am not a coach to confirm if he will play an of the match or not nut the important thing is that he will be in Cameroon maybe starting from the bench or first 11 for Gernot Rohr, the truth is that he will not be left out.

“Don’t forget the doctor recently confirmed he would start training any moment and that is a boast to the Super Eagles preparation.

“Apart from him i do not see any trusted striker in that front. Ighalo just returned and we are yet to ascertain his fitness also few other strikers on the invited list, Osimhen is the only trust fellow for now base on my record.