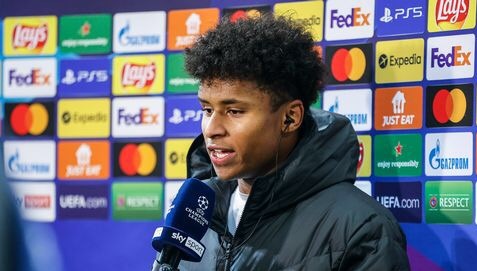 RB Salzburg striker Karim Adeyemi insists he hasn’t made a decision about his future.
SportsDayOnline.com reports that Bayern Munich, Barcelona and Liverpool are all interested in the Germany international.

The 19-year-old Nigerian born forward is much sought-after after scoring 14 league goals this season, and helping Salzburg to the top of the Austrian Bundesliga as well as qualification from their Champions League group.

And he underlined his burgeoning talent by grabbing his first ever professional hat-trick on Saturday as he helped his side to a comprehensive 5-0 win over WSG Tirol.

Despite being named on the bench, Adeyemi wasted no time after being introduced as a second half substitute, scoring within four minutes of coming onto the pitch before going on to add another two in the final 10 minutes.

His hat-trick will only further grow his reputation across Europe, with Liverpool among those sides being linked with a move for him in one of the upcoming transfer windows.

But Adeyemi insisted nothing has been agreed yet as he vowed he will remain focused on his current club.

“As has already been said so often, nothing is fixed yet. And, as I said, I’ll still be at Salzburg next year and that’s where my focus is,” said Adeyemi.

“As I said, I have no tendency.

“I’ve got my head here at Salzburg and I’m still looking forward to the Champions League with Salzburg. We want to get everything out of it.”

Chukwueze: Playing For Eagles Was My Dream Come True