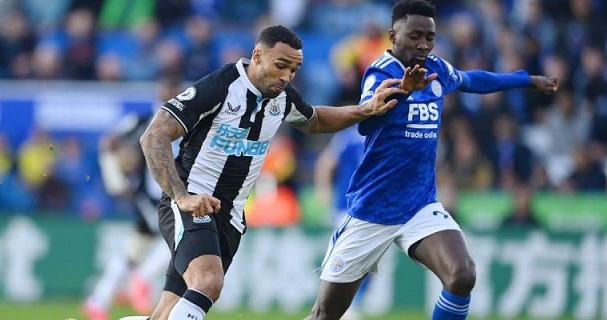 Leicester City of England’s Nigerian trio had different fortunes to flaunt on an evening their team thumped four unreplied goals past Newcastle United, as Wilfred Onyinyen Ndidi got full duration action, but Kelechi Iheanacho and Ademola Lookman were both not dressed for the tie.

On an evening the tumbling woes of Iheanacho reached another depth heading into the Africa Cup of Nations and no explanation came about Lookman’s absence, Ndidi played his own part, as The Foxes ended a difficult week with a 4-0 win over Newcastle United.

With Jamie Vardy benched and Jonny Evans forced off with a hamstring injury inside a few minutes, it was looking like another tricky afternoon for Leicester, who endured a Covid outbreak in midweek followed by their Europa League exit in Naples.

However, sportsdayonline.com gathered via Sky Sports that Youri Tielemans’ controversial penalty (38) gave them the lead after James Maddison was adjudged to have been tripped by Jamaal Lascelles.

It was soft, but there was nothing contentious about Leicester’s second goal as Patson Daka tapped into an empty net to off a fine team move started by a sublime Maddison flick (57), as Ndidi ended with eight points over ten and joint-second best for the hosts, along with both goal scorers.

After a brutal week for Leicester involving a Covid-19 outbreak and their Europa League exit at Napoli, things looked to be getting worse in the opening minutes when Jonny Evans was taken off with a hamstring injury.

Leicester’s coach, It was Leicester’s first Premier League clean sheet since the opening day win over Wolves, moving them up to eighth, while Newcastle stay 19th, three points from safety with a tough-looking range of games coming up – Liverpool (A), Man City (H) and Man United (H).

Brendan Rodgers said after the game: “[It’s] Not good. We think it’s his hamstring. We’ll get more on that tomorrow. Such a shame because he’s a top player.”