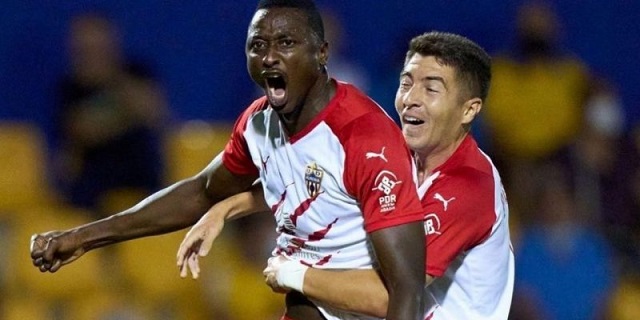 Almeria of Spain hitman, Umar Sadiq finally broke his duck in the Spanish lower division, while Tolu Arokodare also netted in Turkey, as both strikers return to the spotlight with well taken goals for their respective clubs.
SportsDayOnline.com reports that, while Arokodare is relishing how he stuck twice for Amiens of France, Sadiq ended a seven-game drought with a goal in his side’s 3-0 win over visiting Real Zaragoza to further strengthen their hold at the top.

Without a win in their last two league outings, the hosts were desperate for all three points, with Umar leading the line, while the visitors, who were riding on a three-match unbeaten run, handed James Igbekeme his eight start of the campaign.

The second half continued in the same fashion as the first but the hosts finally got their reward on the hour mark when Sadiq’s pressure caused a mix-up between a defender and the goalkeeper, thereby helping the tall attack to calmly slot into an empty net for 1-0.

Sadiq, who was substituted nine minutes from time, had a game rating of 7.1, with his goal contribution now moving up to 14 (8 goals, 6 assists), the most by any other player this season.

In France, Arokodare ended his six games goals drought with two beauties that helped Amiens to a 4-1 win at home versus Grenoble, against who the hosts entered the game off the back of an impressive seven-game unbeaten run.

A goalless opening half-hour was not what the hosts would have envisioned despite dominating the game but their patience paid off five minutes later when Arokodare jumped highest to head home a lovely corner kick from Jessy Benet to make it 1-0.

The lanky striker then made it 2-0 just before the halftime whistle when he lashed on to a Mamadou Fofana long ball before beating his marker and exquisitely slotting past the goalkeeper to double Amiens’ lead at the break.

After helping Amiens record their fourth win of the campaign, Arokodare was deservedly named man of the match with a rating of 8.3, as the 21-year-old took his goal tally to five and one assist so far this season.

Golden Eaglets Off To Turkey On September 19