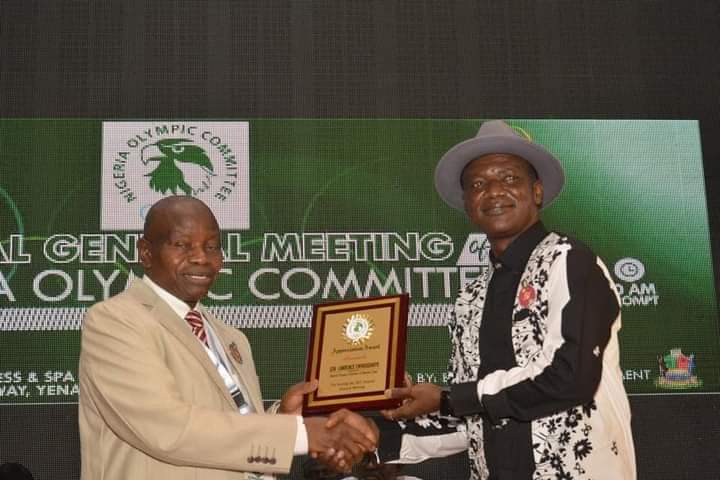 Bayelsa State government wants all sports federation in the country to start preparations ahead of the 2024 Olympic games in Paris, France.

Governor Douye Diri gave the charge at the Annual General Meeting of the Nigeria Olympic Committee, NOC in Yenagoa the Bayelsa State capital.

Represented by the deputy governor, Senator Lawrence Ewhrudjakpo, he said Bayelsa State has taken sports as major business rather than lip service , assuring that the state government would do everything possible for sports flourish.

The governor noted that the idea of the state’s investment in the Asoama sports academy was to discover raw talents, pointing out that the current administration had identified the areas of comparative advantage in Swimming, Wrestling and Boxing.

He posited that the nation’s underwhelming performances in major International competitions was due to the country’s inability to adequately prepare before embarking on tournaments,calling on various federations to commence preparations for the Paris 2024 Olympics games rather than paying lip service.

While commending Bayelsa State government for hosting the NOC Annual General Meeting in Yenagoa, the Minister acknowledged the achievement of the Nigeria Olympic Committee especially in providing technical support to federations in organizing coaching courses as well as granting Olympic training to athletes and coaches .

The Minister opined that he was satisfied with the private sector involvement in sports development, adding that the Ministry would ensure that athletes are adequately prepared for the Commonwealth and the Olympics Games.

Earlier in an address of welcome, President, Nigeria Olympic Committee, Engr Habu Gumel said the general Assembly provides an opportunity for stakeholders to discuss crucial issues relating to sports development in the country, thanking Bayelsa State for the warm reception.

Engineer Gumel who stayed that the outbreak of the Coronavirus Pandemic was responsible for the postponement of the Tokyo 2020 Olympics in Japan, emphasized that it was for the best interest of the nation.

He added that despite the challenges bedeviling the world, the Nigeria Olympic Committee remains focused in the discharge of its duties to the various Sports Federations in the country.

In an interview, Commissioner for Youth and Sports Development, Daniel Igali thanked the Bayelsa State government for the continuous investment in sports development,noting that the gesture has placed Bayelsa State as the leading sports state in Nigeria.

‘AJ’ Picks Date Of UCL Final For His USA Debut