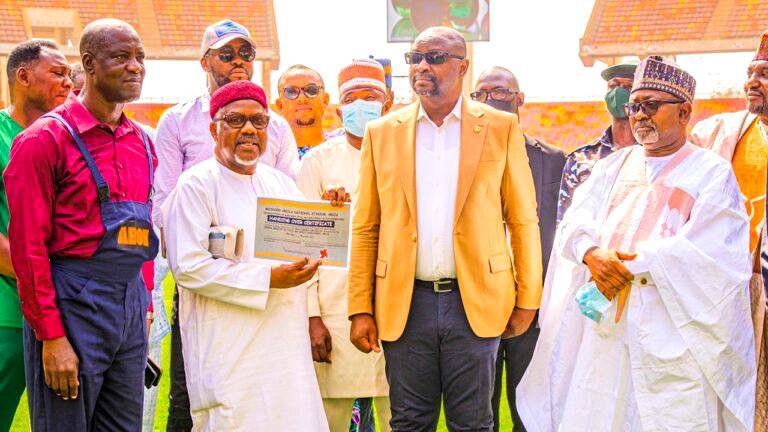 The Minister of Youth and Sports Development, Sunday Dare, has assured that the MKO Abiola stadium pitch in the nation’s capital could host FIFA and other International matches following the completion of renovation works at the ground.

Sportsdayonline.com reports that the Minister made this assertion during the handing-over of the rehabilitated Main Bowl Pitch and Scoreboards of the Moshood Abiola National Stadium, Abuja on Friday.

“The same thing goes for the Waldrum, the coach of the Super Falcons. He was here, and he said this is where he wants his team to play. Also, the Special Adviser to Mr President on Sports, Daniel Amokachi, invited, the technical director of the Super Eagles, Austin Eguavoen and five other ex-internationals to come and get a feel of the pitch. These are people that have played in different pitches around the world and they said this pitch is world standard.

“We have moved from Bahama grass to Platinum TE Paspalum grass, the same one that is being planted and used in Qatar ahead of the World Cup.

“So, we have got it, and we can now make the bid to host FIFA competitions, because when you want to host, FIFA sends a team to come and assess your facilities. We are glad that Abuja has met the FIFA standard.

“Let me tell you, people will watch a game, if it is been played at a functional stadium. It is also a function of the teams and the competitions.

“We intend to also engineer a lot of competition beyond the premier league and the continental matches.

“We are going to come up with several championships. The Principals’ cup is back. It is going to start with 2,600 schools.

“We are going to let them play here. Though filling the stands might not be easy, but we will find a way around it,” he said.

With regard to the first team that will play in the refurbished stadium, the Minister said: “We are planning a novelty match between the members of the Federal Executive Council and the National Assembly just to get the feel.

“After that, we will try and get four premier league teams to come and play. It is important that we keep playing matches on this pitch to keep it in perfect shape, because that is its nature.

“The NFF have the global and continental match timetables so they will work with us. Our role is to make sure that we provide, as a federal government, a state-of-the-art functional main bowl stadium.

“It is expected without questions that now that this is one of the best pitches in the country, our matches will not be taken anywhere else, except here.”

Dare also assured that a maintenance template is in place to ensure that other facilities in the custody of the Federal Government were rehabilitated and do not go back to states of disrepair.

Emmanuel Dennis In EPL Player Of The Month Shortlist

Guardiola Warns Man City ‘To Be Careful’ Against Dennis, Others