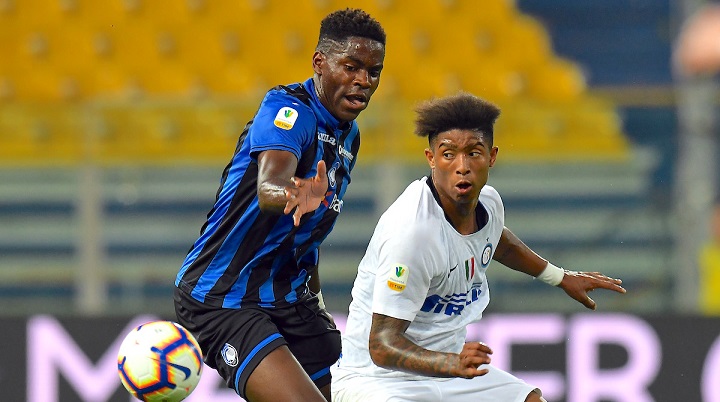 during the Serie A Primavera Playoff Final match between FC Internazionale and Atalanta BC at Stadio Ennio Tardini on June 14, 2019 in Parma, Italy.

AC Milan have set their sights on Nigerian Caleb Okoli of Atalanta, who is on loan at Cremonese, to fill the void created by the injury of Simon Kjaer.

Kjaer’s injury worries Milan who – in view of the rest of the season – are subsequently thinking of accelerating one of the possible summer signing by going on the market in search of a central defender as early as January, and Okoli fits the bill.

Caleb Okoli is one of the defenders being targeted by the club as well as Torino’s Bremer, a player who has been persistently linked with the Rossoneri over the past few weeks and looks set to leave the Granata, but Inter are also keen.

However, Paolo Maldini and Frederic Massara are also considering other options such as Benoit Badiashile of Monaco and Facundo Medina of Lens.

Another option would be to end Mattia Caldara’s loan early even if the player is very happy at Venezia and would like to end his season there.

The feeling is that the Rossoneri’s scouting department could focus on a more experienced centre-back in January, while next summer will mark the search for a deputy to Fikayo Tomori.

Infantino, NFF Board felicitate with Pinnick on birthday anniversary

Serena Williams Thrashes Maria Sharapova In First Round Of The US Open.