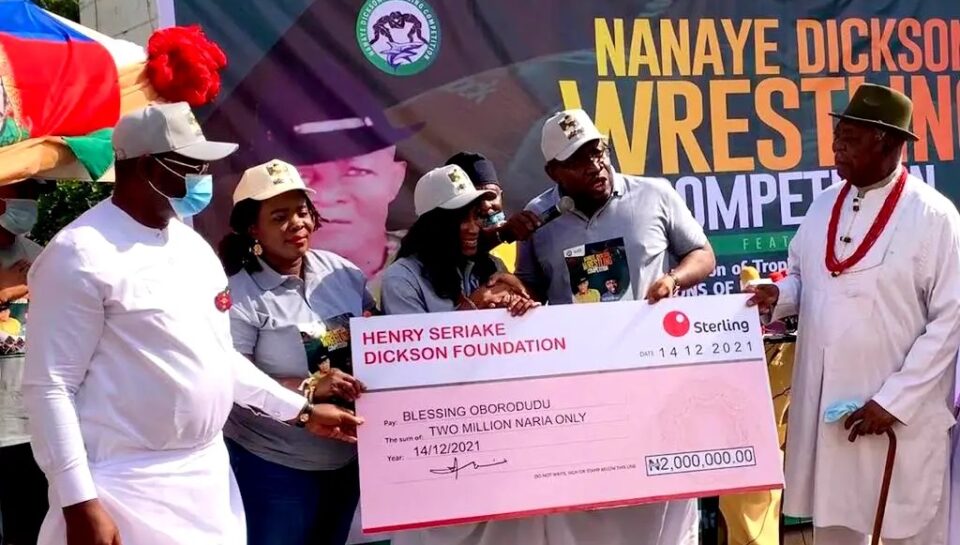 The Minister of Youth and Sports Development, Mr Sunday Dare, the Senate Committee Chairman on Youths and Sport, Senator Obinna Ogba, and the leadership of the Nigerian Wrestling Federation have called in Nigerians in privileged positions to emulate the bold efforts of the Senator representing Bayelsa West in the National Assembly, Senator Henry Seriake Dickson, on Sports Development.

The Minister and the other guests spoke at the unveiling of the 2021 edition of the Nanaye Dickson Traditional Wrestling Competition in Abuja on Wednesday.

The Nanaye Dickson Traditional Wrestling Tournament is an annual sporting event organized in 2012, in honour of the memory of Senator Dickson’s late father, a community leader, an unbeaten wrestling champion and promoter of the game in his time.

This event is deliberately designed to target Bayelsa youths in the bid to promote grassroots Ijaw Traditional Wrestling, culture, as well as to serve as a talent hunt for the youths of the state.

The Minister said that there was ample evidence that Senator Dickson is a lover of sports and its development while as the former Governor of Bayelsa State and now as a Senator.

The Minister called on senators and other lawmakers to emulate the bold contributions of Senator Dickson to the development of sports in the country.

He urged the members of the National Assembly to identify and focus development on a particular sport that has a prevalence of talents in their respective areas in order to produce a new generation of talented athletes in the country.

Dare recalled how the Federal Government adopted the annual wrestling classic initiated by Senator Dickson as a national event.

He stressed that the government would take a cue from the Senator in the area of recognising and identifying sports legends for honour in the country.

In his remarks, Senator Dickson said that his interest in sports and commitment to its development remain the same even after his administration which built a sports academy, sponsored a football tournament known as the Restoration Cup for eight years and the Nanaye Dickson Wrestling Classic which was adopted by the Federal Ministry of Sports.

He said that the event was organized to honour Bayelsa wrestlers who dominate the sport not only in Nigeria but also on the African continent, stressing that Bayelsa has the highest concentration of wrestling champions.

The high point of the event was the presentation of bank drafts of N2 million to Bayelsa born Olympic Silver Miss Blessing Oborodudu and N500,000 to her Coach, Mr Victor Kode.

According to Senator Dickson, the Henry Seriake Foundation, which unveiled the Nanaye Dickson Wrestling Tournament, is also the sponsors of the ongoing community-based grassroots football competition, the Ofuruma Pepe Cup which involves 100 teams and 1000 young boys.

“As you all know, as governor of Bayelsa, I did my best to promote sports in all its ramifications. We established a sports academy, we have several young people who are receiving both academic pieces of training as well as exposure to sports development that is taking place even now.

“For eight years, we also sponsored a football tournament known as the Restoration Cup and the products of that initiative are all over the world, and I want to thank my team for that. We also sponsor the wrestling classic named after me and my father.

“I’m grateful that your predecessor and you adopted our wrestling classic as a national classic. All the wrestlers in our country assemble there in readiness for international competitions,” he said

The Chairman of the occasion and Chairman, House Committee on Youths and Sports, Senator Obinna Ogba, called on politicians to emulate Senator Dickson stressing that no money invested in sports development would be a waste.

He said that he was not surprised that the former Governor decided to sustain his interest and investment in sports development even after leaving office because ‘sports investment means investing on one’s self and the youths.’

He also commended the minister for the ongoing renovation of the national stadia in Abuja and Lagos.

The Chairman, Bayelsa State Council of Traditional Rulers, and the first Governor of old Rivers State, King Alfred Diete Spiff, the Amayanabo of Twon Brass, commended Dickson for the initiative to promote wrestling which he described as the joy of the Ijaw man.

The President of the Wrestling Federation, Mr Daniel Igali, was represented by the Vice President, Mr Christopher Amkpila, who commended the Senator for his unwavering support for the development of sports in the country.

NFF may appoint foreign coach for Eagles before AFCON

Hamburg close in on Bundesliga return after win in Berlin