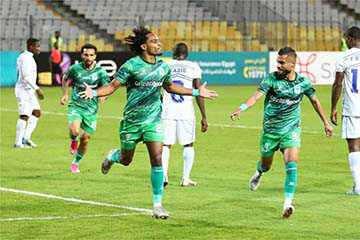 The victory overturned Rivers United’s 2-1 home win last Sunday as Masry went through on the away goal rule.

Masry started the game with an early pressure that resulted in a deserved lead after 12 minutes when a powerful shot from midfielder Farid Shawki was blocked by Rivers United keeper, with the ball falling to Grendo to slot home from close range.

Masry then hardly threatened until the early stages of the second half when a free kick from Mostafa Soltan hit the post, with Nigerian striker Austin Amutu’s poor follow-up effort denied by the keeper from six yards out.

A minute later, Amutu raced clear on goal but missed the target as Masry failed to kill off the game.

In a Telephone chat after the game, Austin Amutu told Sportsday that, “I am happy we won today’s game against rivers united and for us to qualify to the group stage.

“Now the CAF Confederation Cup tournament kicks off because group stage is not going to be an easy one for the teams that qualified but we are not going to give till the last minute,” Amutu added.

The visitors created some danger towards the end but Masry held to seal their place in the group stage of Africa’s secondary club competition.