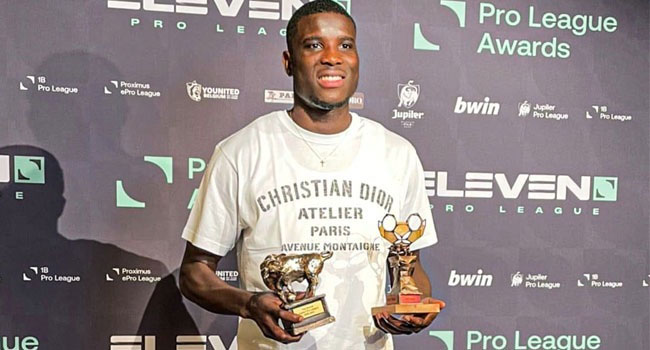 Racing Genk of Belgium striker, Paul Ebere Onuachu has received a strong tip to emerge winner of this year’s Golden Shoe Award in the country where he plies his soccer trade.

SportsDayOnline.com reports that this is the verdict of his club’s technical director, Dmitri de Conde, who reckoned that Onuachu is well placed for the prestigious gong, having emerged top scorer last season in the league.

Onuachu rained a massive haul of 35 goals across all competitions, which not only earned him the top scorer’s prize but also made him the league’s most valuable player and Ebony Award winner for best African performer.

He could now be en route to adding the calendar year’s best player award for 2021 to his closet, as Conde believes the Super Eagles’ star deserves to clinch Belgium’s Golden Shoe.

He pointed out that, with a scorecard of 28 goals in 36 league games this year and 12 so far this season in the top-flight, now is the time for Onuachu to clinch the prize in which he placed third last year.

The Genk technical buff stressed that the former Young Stars of Lagos, FC Ebedei of Shagamu and FC Mydttjylland of Denmark hitman is a very good candidate for this year’s esteemed accolade.

Conde declared: “Paul Onuachu broke all the records that could be broken last season.

“He deserves the shoe for that alone. Despite his lesser period, he has already scored 12 goals this season.”