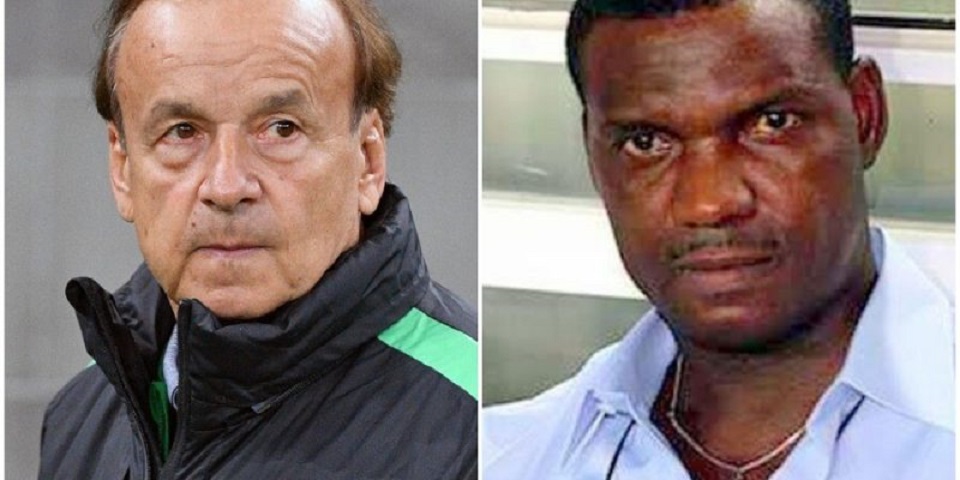 According to the NFF, Eguavoen, currently its technical Director, becomes the Technical Adviser of the Super Eagles on an interim basis with immediate effect.

Rohr, who has been in charge of the three–time African champions for the past 64 months, is Nigeria’s longest–serving manager.

NFF General Secretary, Dr. Mohammed Sanusi said: “The relationship between the Nigeria Football Federation and Mr. Rohr has come to an end. We thank him for his services to the Super Eagles and Nigeria.

“We also want to thank the Federal Ministry of Youth and Sports for their collaboration and guidance all through.”

Eguavoen, a former Nigeria captain, was coach of the squad when it finished in third place at the Africa Cup of Nations in Egypt in 2006. He was on-field captain when the Super Eagles lifted the Africa Cup for the first time on away ground, in Tunisia 27 years ago.

He will now take charge of the team as it begins preparations for the 33rd Africa Cup of Nations holding in Cameroun from January 9 to February 6, 2022, and until the appointment of a substantive head coach.

Meanwhile, the Super Eagles may have become one of the first direct victims of the recent diplomatic spat between Nigeria and some foreign nations over the new strain of COVID-19 (Omicron) pandemic ravaging the world.

It is less than one month to the kick off of the 2022 African Cup of Nations billed to be hosted by Cameroun and the Nigeria Football Federation (NFF) is at a crossroads over how to prepare the senior national team for the competition.

The African Cup of Nations will hold from January 6 to February 9.

According to sources at the NFF, the Super Eagles’ camp is not likely to hold in Nigeria following the travel restrictions between Nigeria and the United Kingdom, as well as Saudi Arabia and other European countries. This is because the bulk of the players listed for the competition reside in the United Kingdom and some other European countries, which are currently involved in a diplomatic spat over the spread of the Omicron variant of COVID-19.

The Federal Government at the weekend declared that with effect from tomorrow, December 14, Nigeria will not permit airlines coming from Canada, United Kingdom and Saudi Arabia to enter into Nigeria.

Minister of Aviation, Capt. Hadi Sirika, who announced the decision in Lagos, explained that it was to reciprocate restricted flights from Nigeria into those countries over the new COVID-19 variant, Omicron.

Sirika said President Muhammadu Buhari’s administration would also place the United Kingdom, Canada and Saudi Arabia on a red list over the outbreak and spread of the Omicron variant.

The minister noted that if those countries placed Nigeria on a red list, they lack the moral right to have their airlines fly into Nigeria on commercial operations.

With this recent declaration, such key Super Eagles’ players as William Troost- Ekong, Alex Iwobi, Joe Aribo, Kelechi Iheanacho and Saudi Arabia-based Odion Ighalo, among others, will find it difficult to come to Nigeria for preparations ahead of the AFCON.

A source at the NFF secretariat told The Guardian yesterday that the Federation was still pondering how to go about getting the Super Eagles ready for the AFCON, adding that the alternative is to direct the players to converge on a neighbouring country for camping.

He added that the federation is still monitoring the situation and will in due course, liaise with the Foreign Affairs Ministry through the Sports Ministry on how to go about the situation.