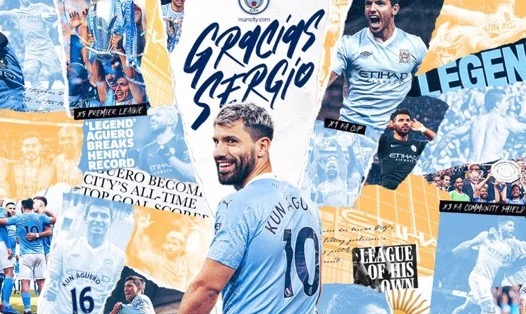 Sergio Aguero has confirmed his retirement from football during a press conference held in Barcelona on Wednesday.

The 33-year-old was taken to hospital after experiencing chest pains and breathing difficulties during Barcelona’s 1-1 draw with Alaves in October and was subsequently ruled out of action for three months following a cardiac arrhythmia diagnosis.

He has now decided to call time on his extraordinarily successful and storied career.

Aguero finished his career with 427 goals in 786 games.

He is the fourth-highest scoring player in Premier League history with 184 goals in 275 games, behind only Alan Shearer (260), Wayne Rooney (208) and Andrew Cole (187). He is also the league’s highest-scoring overseas player, having registered nine more goals than Thierry Henry (175).
Aguero scored every 108 minutes in the Premier League, comfortably the best rate in the competition’s history. Indeed, he could play another 2,520 minutes (28 games) of Premier League football without scoring and would still have the best minutes-per-goal ratio of any top-flight player with more than 20 goals.
The Argentine scored 18 hat-tricks in his career, including 12 in the Premier League – a record in England’s top flight.
He scored 20+ goals in all competitions in 12 of 13 campaigns between 2007/08 and 2019/20, reaching 30 or more on five separate occasions during his time at Manchester City.
Aguero scored 36 goals for Manchester City in the Champions League, the joint-highest total a player has registered for an English side in the competition’s history (along with former Chelsea striker Didier Drogba).
He found the net against 128 different opponents, including the likes of Barcelona, Real Madrid, Bayern Munich, Chelsea, Liverpool and Manchester United.
There were 16 years and 332 days between Aguero’s first career goal in November 2004 (for Independiente) and his final strike for Barcelona – against Real Madrid in October 2021.

NFF may appoint foreign coach for Eagles before AFCON