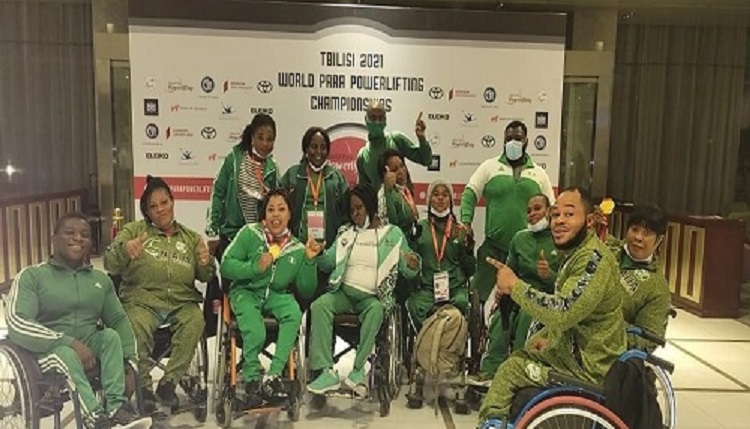 The athletes amassed six medals – three gold, one silver and two bronze – behind Iran at the end of the competition yesterday.

Chile’s anthem played proudly as their Mixed Team claimed the final gold medal of the Championships on Monday to topped the medals table with five gold, four silver and four bronze.

Rising star, Onyinyechi Mark left her mark on the 3rd day as she broke the junior world record twice on her way to securing silver with her lift of 131kg in the women’s up to 61kg.

Nigeria won its first gold as captain of Team Nigeria to Tokyo 2020 Paralympic Games, Lucy Ejike took to the highest podium following her victory in the 67kg events on the 5th day of the competition.

The Nigerian flag flew proudly for the second time in two days as 2020 Paralympic Games gold medalists, Bose Omolayo drove to victory with a lift of 144kg and set a new world record in the women’s up to 79kg category.

Another paralympic champion, Folashade Oluwafemiayo followed suit as she was crowned with a third world title after lifting 152.5kg in the women’s up to 86kg to break the world record and improve on her previous WR of 125kg.

Also in the women’s up to 73kg, Nigeria’ Khalifa Almaruf got to the podium after clinching bronze with her lift of 138kg, while Esther Nworgu won the other bronze in the women’s 41kg.