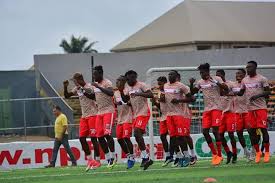 There are a strong indications that the players of Heartland Football Club of Owerri refused to attend their Thursday evening training due to unpaid 3 months salary including the Christmas benefits.

Source close to the management revealed to SportsDay this evening that Heartland management could not meet up with the promises paid to the players before to commencement of the 2021/22 Nigeria Professional Football League (NPFL).

He further disclosed that the players have being in camp on Orlu since August till the league kicked off last weekend.

According to him,”The players refused to train today because no money has been given or paid to them since the team resumed officially.

“Throughout the camping till now it has being one promise to another and this is Christmas, what do they want us to tell our families or how do they want us to concentrate on our next away match against Remo Star FC which suppose to come up this Sunday.

“So because of this the players decided to take their fate into their hands and never come out for training this evening but we hope by morning the management under Promise Nwachukwu will do something concerning it.

Imo State CAN Chairman berates Pinnick for Super Eagles downfall, says he prides himself above the job